Welcome to the 7th tutorial in the series. We have discussed arrays and strings in the previous tutorial. Now is the time to discuss something more advanced and technical. Yes, we are going to discuss pointers in this tutorial. Pointers are considered one of the trickiest concepts in the C++ programming. But don’t worry; we are going to explain it in a very lucid manner. I can assure you that after completing this tutorial, you will be teaching pointers to all your friends!

As usual we will start with our basic console application which will look like the following code.

Let’s have a quick glance at the contents:

What is a pointer?

What is a pointer?

This question is asked by every newbie C++ programmer, and starters get confused about this topic. However it is not as difficult as it seems. A pointer is just like a variable. The difference is in the syntax and what a pointer can store. For example, a variable stores a value. On the other hand, pointers are used to store the memory address of some variable. It means that memory allocated to a pointer contains the memory address of some other variable and not the actual value of that variable.

Here is how we declare a pointer of type integer.

Now pointer1 will refer to the memory address variable1, but not the value.

In case you want to put a new value into a variable using a pointer then you add a * character in front of the pointer name such as *pointer1 shown below.

Now the variable named variable1 has a value of 100.

The Following are some of the advantages that pointers provide to developers:

* Various data structures, such as linked list and trees are developed using pointers as they enables the programmer to access memory address which are used to link nodes in linked lists and trees.

* Pointers are particularly useful in low level programming such as writing reference counts for garbage collectors.

* Pointers can also be used for data sharing among different sections of code. As memory address can be accessed from anywhere. They can be used as global variables.

* Pointers can be used to pass address of an object to a function instead of passing the whole object itself. This type of passing is called passing by reference in programming terminology.

As discussed earlier, a pointer can hold any data type. Same is the case with characters and strings. Pointers can refer to memory addresses of any string or character. In fact pointers gives you more control over your strings by using array indexes to reference each character of a string. The following example explains this concept. You must use const before char in Visual C++ for this example to work without errors.

As discussed earlier, there is a difference between a constant character string declared using

char abc[] and a pointer to string such as const char *ptr;

In the case of char abc[] it holds the actual data of the string in the form of individual characters in contiguous array index. On the other hand const char *ptr points to the starting address of the array and we can continuously move to the next memory address using pointer arithmetic. The following project explains this concept. In this example the pointer is moving consistently to the next memory location of the string and hence the output string starts printing with the value stored at that index. The code and output of the projects are as follows: 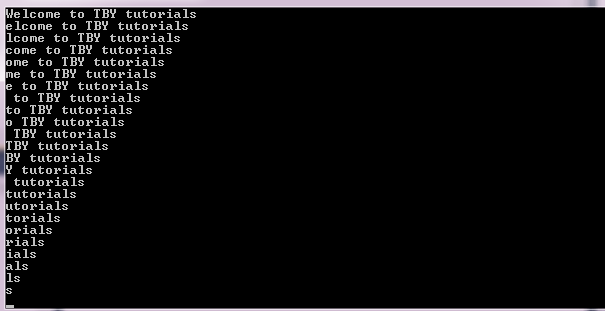